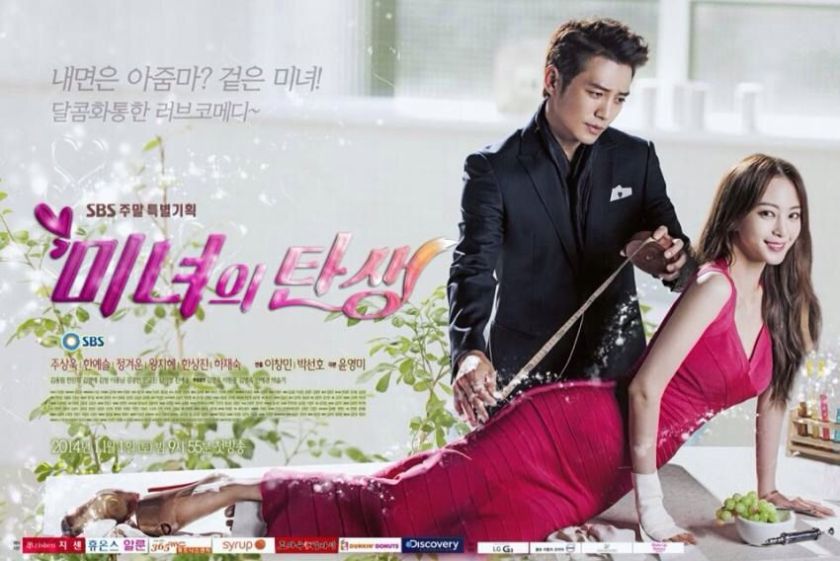 I was conflicted on starting this drama. I knew it was going to be problematic and portray a warped perception of beauty. However, I enjoyed the movie “200 pounds of beauty” — of which “Birth of a Beauty” is a loose remake — and wanted something fun and light so I  decided to give it a go.

Birth of Beauty 미녀의탄생 is the story of Sa Geum-ran (portrayed by Han Ye-seul) who at the beginning of the drama is a good natured, overweight, married woman. Despite her loveliness she is treated badly and taken for granted by her in-laws and community. Her life takes a turn for the worse when she discovers her ambitious husband Lee Kang-joon’s (portrayed by Jung Gyu-woon) infidelity with a well-known but manipulative news anchor Gyo Chae-yeon (portrayed by Wang Ji-hye).

After this discovery, she tries to leave her husband and threatens to expose his infidelity. Lee Kang-joon in an attempt to silence her, causes her to drive her car off a cliff. With everyone believing she is dead, Sa Geum-ran approaches Han Tae-hee (portrayed by Joo Sang-wook) who she believes is a plastic surgeon to give her a full body make-over.

For his own reasons, Han Tae-hee agrees to help her become a ‘beauty’ and get revenge on her husband. However, in the process of their very convoluted revenge plan, Han Tae-hee and Sa Geum-ran (now known as Sa Ra) fall in love…

Birth of a Beauty was not a hard watch but it’s certainly not designed for binge watching (this drama reiterates the same story arc about 3 times). It does however satisfy that weird desire to watch the transformation of disempowered woman to one with power.

While the main plot is Sa Ra’s revenge story there are two main sub-plots both involving the lead male, Han Tae-hee. The first is Han Tae-hee overcoming his broken heart syndrome (it is revealed he is in love with Gyo Chae-yeon) and the second is the fight for control over the well-known conglomerate, Winner Group.

The best part of this drama was the lead female Sa Ra. She was incredibly likeable. Her earnestness when combined with lead male’s brash and conniving ways was fun to watch. However, Sa Ra should never be any girls role model – she is not very bright, is impressionable and easily gives up.

As with all well-made Korean dramas, another positive was watching the first male lead slowly warm up to and later fall in love with the first female lead… it was very cute.

The problems with this drama were extensive, leaving aside the premise of it, it suffered from pacing issues, was too long and repetitive. Birth of Beauty starts out relatively strong but slows down from about episode 5. There is a distinct lull from episodes 15-19. It picks up again at episode 20 but by that stage it is easy to understand why many viewers would have already dropped it.

Overall, I found this drama to be light and fun, however I won’t be re-watching it. I have listed below the episodes which most progress the story. Before I get into it, I should note that there will be ‼️spoilers‼️

The plan is to meet and seduce Lee Kang Joon at a charity event he is hosting. After a number of attempts, Tae Hee pulls out the ultimate card which is to give Sa Ra one hundred thousand dollars to donate. In doing so, Tae Hee reveals he is the son of a leading conglomerate. While Sa Ra doesn’t believe him (and laughs it off), she still takes the money and begins to doubt whether he is in fact a doctor.

Ultimately, their plan succeeds in that Lee Kang Hee is smitten with Sa Ra however Tae Hee hits a snag — Sa Ra now wants to get back with her cheating/murderous husband…

It takes a number of episodes for Sa Ra to come to terms with the truth specifically that her husband Kang Joon is not a good guy and that it is not a good idea to get back with him.

In coming to this realisation she falls into a depression and begins to let herself go. Tae Hee who has started to develop feelings for Sa Ra is conflicted on whether to help her or avoid her, in order to progress the drama he decides he has no choice but to help her and Revenge Part 2 commences — Destroy Kang Joon’s career.

Tae Hee, who conveniently also happens to be a tech genius, sends a virus to Winner Group (where Kang Joon works). In order to regain his trust, Sa Ra is to provide him with the anti-virus. Before she goes in with the ammunition, her path crosses with Min Hyeok.

Things get interesting when we learn that Min Hyeok and Tae Hee are both possible heirs to the Winner Group. Their grandmother reveals that Min Hyeok’s mother got her son drunk and tricked him into sleeping with her, while Tae Hee is her legitimate grandson. The only problem is that no one knows Tae Hee is alive…

Arriving at episode 10, Tae Hee finally acknowledges that he is in love with Sa Ra. The only issue is he tries to introduce her to things she isn’t accustomed to like going to the opera and buying expensive gifts. Sa Ra (the ajumma who likes to cook) falls asleep at the opera and decides she prefers the supermarket over the expensive stores.

Suffice to say, neither party are happy. Tae Hee is upset because all his effort are wasted and Sa Ra is upset because Tae Hee wants her to be something she is not. It’s surprisingly that this is news to her because it was Tae Hee who physically ‘redesigned’. Anyhow, Tae Hee decides to undergo hypnosis to see Sa Ra as Sa Geum-ran in order to prove to Sa Ra that he does indeed like her for her personality.

Other episode 10 happenings include Chae Yeon trying to win back Tae Hee and Min Hyeok trying to woo Sa Ra.

A third attempt at revenge commences at episode 13 and 14. But before Revenge (Part 3) commences, Chae Yun tries to break Sa Ra and Tae Hee apart by coercing Sa Ra into eating peanut butter (to which she is highly allergic) at the set of a new cooking show featuring Sa Ra and hosted by Chae Yun.

Unfortunately,  Kang Joon who already suspects Sa Ra of being Sa Geum-ran confronts her. She passes out and he takes her back to his apartment. Tae Hee rushes to her rescue but not before he misunderstands the situation.

It takes him a whole episode to realise that she was in fact very ill and in need of medical attention. After Sa Ra receives the appropriate medical attention, Tae Hee (the genius) proposes that Sa Ra’s rice balls (featured on the tv show) become the new Winner’s Food product.

Episode 14 is primarily dedicated to the grand launch of Sa Ra’s rice balls. Tae Hee has this launch for two reasons:

Other important events in this episode include: Sa Ra rejecting Min Hyuk, Kang Joon finally realising that Sa Ra is his ex-wife and Tae Hee proposing to Sa Ra.

These last couple of episodes do a good job tying up loose ends and will come as a relief for all those still watching. In summary —

Chae Yun gets what’s been coming to her after Sa Ra on a live interview exposes Chae Yun’s infidelity and part in her attempted murder. When word gets out, Chae Yun looses everything – her job, her agency and her friends.

Kang Joon, who is on the run (for attempted murder and other things) seeks to play both sides. He first extorts Tae Hee for money/travel documents in exchange for giving Sa Ra a divorce. He also brokers a deal with Min Hyuk to arrange for Tae Hee murder in exchange for more money. Unfortunately, his plan falls through and he ends up going to jail…

As for Han Min Hyuk, Tae Hee exposes his attempt to have him murdered and his mother’s involvement with the death of his parents. Min Hyuk and his mother presumably go to prison for a long, long time, More importantly though Tae Hee now has full control over Winner Group.

As for our couple, all’s well that ends well, they are now both very wealthy and attractive.

What did you think of Birth of a Beauty?