I went to a friend’s birthday a couple of months ago and ‘The Doctors’ ( 닥터스)  was recommended to me by a fabulous Kdrama enthusiast. While I have enjoyed most Park Shin-hye 박신혜 dramas, I have not been a fan of her character in them. She comes off as too clueless, too fragile, a pushover and at the mercy of her male counterparts (see example, The Heirs, You’re Beautiful, Heartstrings…)

For the reasons above, I was reluctant to watch The Doctors. However, after listening to the compelling case put forward by this Kdrama enthusiast — who assured me that Park Shin-hye is different in this drama — I began watching The Doctors. 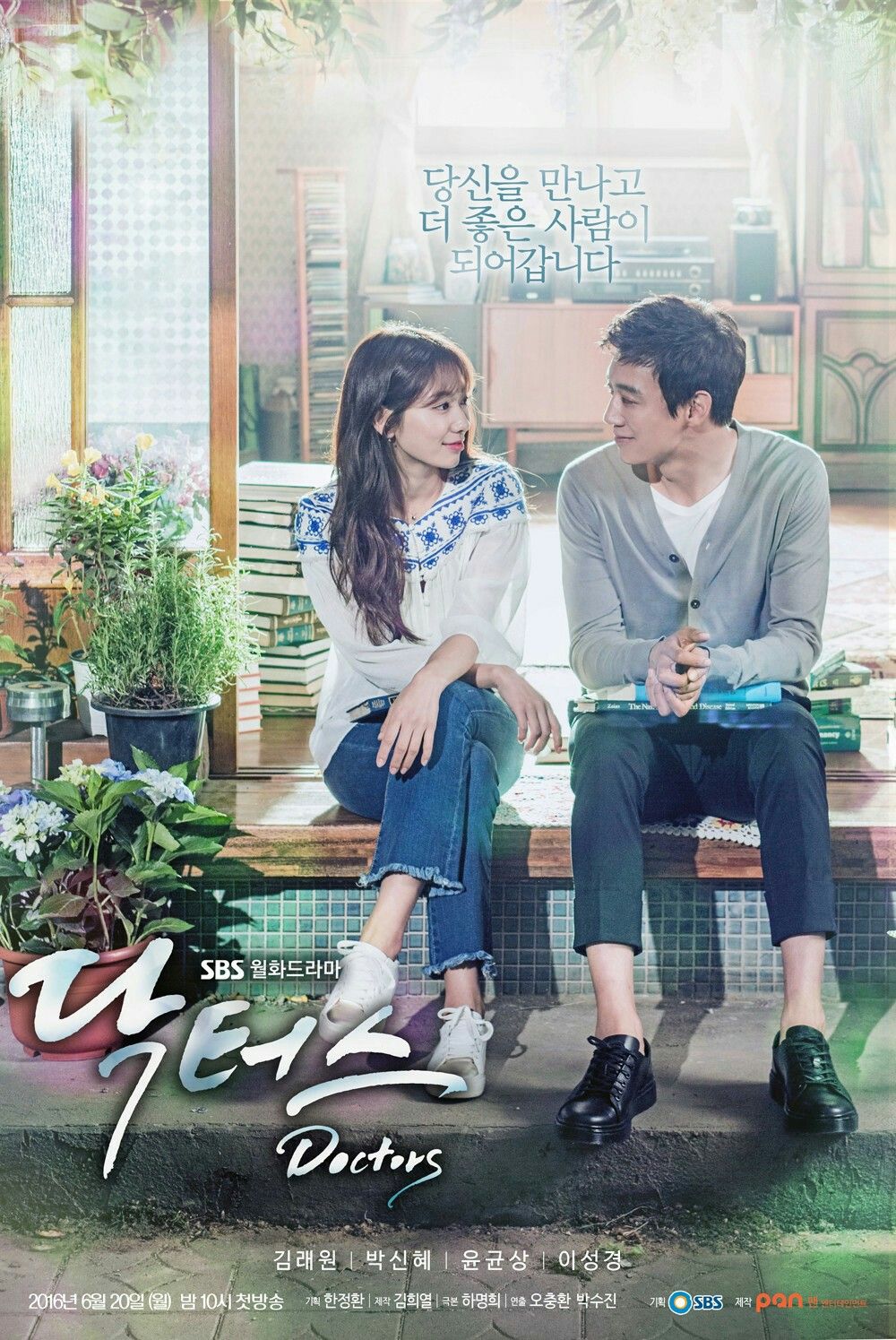 The first few episodes provide the foundations of understanding teenage Yoo Hye-jung. The death of her mother, her father’s remarriage to a cruel/proud woman and  callous teachers all contributed to Hye-jung’s rebellion. Ultimately, her father abandons her by sending her to live with his mother and that’s when things begin to change for Hye-jung.

It is her relationship with Ji-hong that is both a blessing and curse. Ji-hong pushes Hye-jung to reach her potential and introduces her to medicine as a career option. However, he is also in part the reason she goes through a few more unfortunate events.

Following a series of events (which I go into detail later) Hye-jung and Ji-hong go their separate ways only to meet 10 years later, both as neurosurgeons at a prestigious Gukil Medical Centre.

It is at this hospital where the bulk of the drama is set incorporating elements of a typical Kdrama – love triangles, female rivalry and revenge.

The first half of this drama is stronger than the second part which suffered from pacing issues — there is a drawn out revenge saga and love story (spoilers below). Nevertheless, I was satisfied with the ending and particularly liked the subtle messaging: that a community is needed to care for a child and that any child has the potential (regardless of background) to contribute in a meaningful way to a functioning society.

The flashback from Episode 1 continues in Episode 2 and we see Hye-jung solidify her new relationships with Grandma, Ji-hong and Yoo-ra.

I particularly enjoyed this episode because we see the cold and hard exterior of Hye-jung begin to crack at first with Ji-hong refusing to administer corporal punishment and later with Yoo-ra adorable adoration for Hye-jung.

Yoo-ra’s generosity and earnest attempt to help Hye-jung succeed in school is a breathe of fresh air. I was kind of waiting for Soon-hee to turn on her but she never does. She really just wants the best for Hye-jung. Soon-hee’s sincerity is juxtaposed with Seo-woo insincerity. Seo-woo’s reticence to help Hye-jung, her belief that she is the best and her one sided affection for Ji-hong are all signs for future misgivings.

The sweetest relationship though is Grandma and Hye-jung’s. Grandma cherishes Hye-jung and is trying her best to do right by Hye-jung including change her communication style (which for anyone, let alone someone at that age, is a difficult ask).

Importantly, we get a flash-back within the flash-back and find out that Ji-hong is in fact an orphan having lost both his parents in a car accident.

This episode moving quickly and ends with a major cliff-hanger. After Seo-woo spread the rumour about Hye-jung and Ji-hong (that they are romantically involved), Hye-jung and Yo-ra confront her in an abandoned house.  A fight breaks out between Hye-jung and Seo-woo and the old house catches fire. The episode ends with the heartbreaking narration by Hye-jung — “Living differently seemed easy after experience one success, but it advertised that my surrounding environment was still the same.”

The flashback ends in Episode 4. For those reeling after the tragic ending in Episode 3 (Hye-jung’s grandmother’s death and her separation with Ji-hong) – I feel you and you will get some redemption in this episode.

Hye-jung (for reasons unclear at this point) is the new neuro-fellow at the prestigious Gukil Medical Centre where she meets some old faces, makes some new rivals and generally creates a stir. Notably:

The best bit about this episode though is seeing how close Hye-jung and Soon-hee still are (this has to be one of the best on-screen friendships).

We pick up at Episode 6 after another dramatic ending in Episode 5 (it seems I prefer the aftermath to rather than build up).

The dramatic/heroic scene in Episode 5, was Hye-jung’s rescue of a gang-boss (the same gang-boss in Episode 1) from a knife wielding man. I repeat, it was Hye-jung who did the rescuing not Yoon-doo or Ji-hong (who were either too late or stuffed things up).

Hye-jung to the rescue was a bit too much for Yoon-doo and suffice to say at this point he is well and truly besotted with Hye-jung.

Ji-hong (who lead the brigade of men obsessed with Hye-jung) is put in a compromising situation when Hye-jung reveals she joined Gukil Medical Centre to uncover the reason behind the death of grandmother and needs Ji-hongs help to access confidential information. Ji-hong although initially hesitant eventually succumbs and helps Hye-jung uncover the truth.

Hye-jung and Ji-hong share their first ‘romantic’ scene in this episode, which I was very medium about. It must be because I don’t find dancing in the rain particularly appealing.

I acknowledge that jumping from Episode 6 to Episode 15 is big but as with all 20 Episode KDramas there is a substantial amount of filler and toing and froing. A quick recap of notable events include:

Hye-jung reuniting and separating from Soo-chul (portrayed by Jisoo) who presumably leaves Hye-jung to be with his son? Who knows for sure because after his motorcycle accident in Episode 8, we sadly don’t see him again.

The fight to maintain the hospital as a public-service rather than a profit-focused-business continues. My opinion on this sub-plot would be a long the lines of I don’t really care/understand. It seems to be a combination of succession, a debate about the best business model for a hospital and the issue of nepotism? Honestly, I found the scenes where they discuss it quite dull and overly convoluted.

Other sub-plots include, Hye-jung treating her cruel step-mother  and showing her who is boss (Episode 7), the passing of Ji-hong’s adopted father (Episode 11) and a relationship between  Joong-dae and Soon-hee forming (Episode 13 onwards).

Now back to Episode 15, this has to be the saddest episode of the drama not because of the main characters but because of the individual medical stories (which The Doctors has in almost every episode). There are three disparate medical stories with the final one ending with the narrative “a miracle didn’t happen. It’s normal for miracles not to happen. That’s why they’re miracles.” A little dose of reality for those of us in La La Land.

Episode 20 | The finale and closure

Episode 20 is an episode of closure. Hye-jung finds out that her grandmother’s surgery was botched but the matter was settled with her father (who took the money to open his now successful restaurant). I appreciated that Hye-jung could not get over or forget her father’s actions. I thought it was despicable that he abandoned his daughter when she needed him most. There are somethings you can’t fix and abandoning your daughter in her time of greatest need is one of them.

Hye-jung’s rivalry with Seo-woo finally ends with Seo-woo growing a backbone and standing up to her family. She also starts a romantic relationship with her best-friend/confidant Young-kook.

And finally Hye-jung learns to love/trust and she has her happily every after with Ji-hong — not that there was ever a moment in the drama where I thought this would not be the case. Ji-hong was a great male lead (funny, charming and the best neurosurgeon ever) that Yoon-doo just could not compete.

I enjoyed the finale and felt that is was an appropriate ending for a somewhat involved drama. There was a lot happening in this drama, we had Hye-jung revenge story, her love triangle situation, her rivalry with Seo-woo (Seo-woo’s own family situation)…. the list continues.

Personally I thought too much was happening. This drama could definitely have axed a number of sub-plots. Nevertheless, I would recommend it to anyone who likes a good medical dramas with a dash romance and revenge.

What did you think of The Doctors?