Zhang Bin Bin 张彬彬 finally gets a lead male role! Although I was hoping for another reunion with Dilraba, I was impressed by and enjoyed Ariel Lin’s 林依晨 performance.

I Will Never Let You Go 小女花不弃 (also known as, Legend of Hua Buqi) is a seemingly light period drama. Although, the production value isn’t great, the story line and acting more than make up for it.  On the whole I enjoyed this drama (particularly at the beginning) but reckon it would have been infinitely better if it was shorter (by about 10 episodes) and had a different ending (spoilers below at Episode Guide). 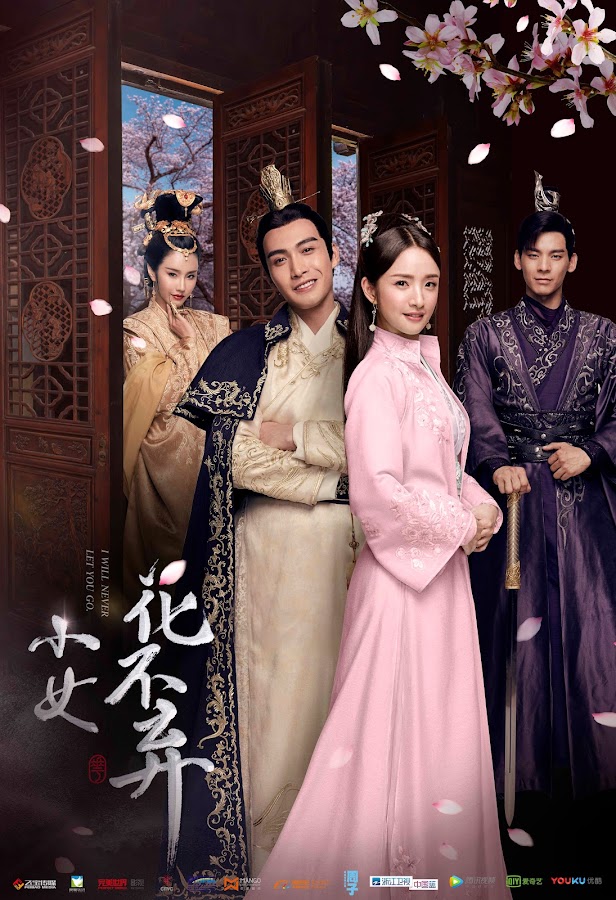 Episode 1 provides the basis for literally all the different future plot lines. In it we see the beautiful Xue Fei, heavily pregnant and running with her brother from something or someone. After seeking refuge in a barn, she gives birth to a baby girl who she then proceeds to suffocate (shocking and unexpected). Her brother alarmed by her actions, takes the baby away from her and asks Xue Fei why she is trying to kill her own daughter. Xue Fei responds that this is the only way for her to avoid suffering. Ignoring Xue Fei’s warped reasoning, her brother takes the baby girl and goes into hiding.

Xue Fei is soon found by the Seventh Prince — its unclear what their relationship is — before he can take her away, she dies (another shock). It is left ambiguous whether she has died during childbirth or for some other reason.

Episode 1 continues following Xue Fei’s daughter (Bu Qi), who is now about 7 and is a beggar with her uncle (strange choice of profession).  It is made painfully obvious that Bu Qi is not only very courageous but also good at business. Her uncle on the other hand seems intent on keeping them hidden (these little details we all become important later).

The final scene of episode 1 shows Bu Qi (now presumably a teenager, although Ariel Lin is 37) engaging very successfully in various trades. She is only detracted from her very serious business transactions twice: once during a story telling of renowned, mask of zorro like character Lei Yi Ke and another time when she witnesses Le Yi Ke fighting off some bad guys. Little does Bu Qi know that Le Yi Ke is not only the Seventh Prince’s only son (Chen Yi/Zhang Qing) but also her soulmate.

get answered. On the way we also get introduced to a multitude of different characters. Importantly is Dong Fang Shi (portrayed by Austin Lin 林柏宏) who carries the weight of second male lead in this drama.

I have to say that I didn’t think I would enjoy this drama as much as I did (that is up until the final arc which I have major issues with). Bu Qi’s sass and wit had a lot to do with it.  However, I liked Austin Lin’s character a lot more than Zhang Bin Bin’s. He had a bit more depth. While I accept that he was a bit of a sociopath (at the beginning) I do think he redeemed himself so unlike every other drama with Zhang Bin Bin, I was shipping for the other lead.

Zhang Bin Bin’s character, Chen Yi/Zhang Qing was a little one dimensional. His reasoning for a lot of things like living a double life as Le Yi Ke is never properly explored. I really felt like not enough time was invested in developing his character (or his relationship with Bu Qi). I blame this for my support of a Bu Qi/Dong Fang Shi couple.

The weakest character however would have to be Yun Lang – I have no idea why this guy was included (to contrast Mo Ruo Fei?). Speaking honestly – his martial arts skills weren’t great, its a mystery why he liked Bu Qi and he just was really brash/careless. He was just really unremarkable … (if you think differently please let me know) I just did not see the point to his character at all. There was also a strange love triangle with Lin Zi Qing but again it was not enough to be remembered.

Although this drama did start to get quite repetitive in the later episodes the overall plot was not lost and I could follow (not always happily though). For the episode guide below I have put a 🌟 next to my favourite arcs but please beware that there are ‼️ major spoilers‼️

Four episodes may not seem like a lot, but it really did feel like Hua Bu Qi spent a lot of time as a beggar. In this arc, we see how close Bu Qi is to her uncle Zhu Hua/Uncle Jiu. Uncle Jiu over the years has neglected his health and is obviously very ill. His illness culminates in him losing consciousness and Bu Qi is forced to find medicine to help heal him.

Hua Bu Qi having a knack for getting in trouble or requiring help receives a lot of attention from Le Yi Ke whether it’s obtaining medicine for her uncle or protection from assassins. 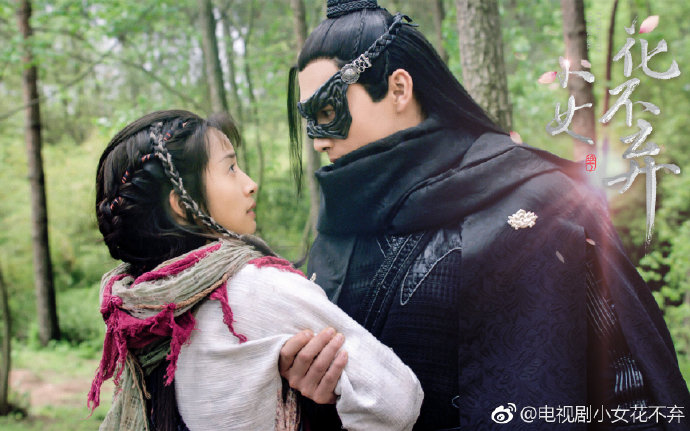 The final attack on Hua Bu Qi by Liu Qing Yan (from Ming Yue Manor) ends with the death of Uncle Jiu. His parting words to Hua Bu Qi was to make her capital and discover her true identity.

In this arc, two main things happen to Hua Bu Qi: she falls in love with Chen Yi and finds out who she really is.

Mo Ruo Fei (portrayed by Xing En) in an effort to gain some favour with the Seventh Prince — who is looking for his daughter, which Mo Ruo Fei believes to be Bu Qi — decides to take Bu Qi back to the capital despite the dangers that await them.

However, at the capital, no one (other than Mo Ruo Fei, Yun Lang and the Seventh Prince) is particularly happy to see Bu Qi. Chen Yi believes that Xue Fei caused his mother’s death and does not want to accept Bu Qi as his half sister which causes Mo Ruo Fei to ‘adopt’ her as his sister. Meanwhile, Mo Ruo Fei’s mother who also hates Xue Fei — as she believes Xue Fei seduced her husband and Mo Ruo Fei’s husband — wants Bu Qi dead.

It is later revealed that Chen Yi and Bu Qi are not siblings (thank goodness for them, as they fall in love). The Seventh Prince only pretended that she was because she is the priestess of Bi Luo Tian — as was Xue Fei — and is pivotal to ruling the world (whatever that involves).

Bu Qi — who is dying as a result of Mo Ruo Fei’s mother actions — has her plan with Zhu house expedited and fakes her death. Together with Zhu house make their way to Su Zhou.

Our main couple don’t spend a lot of time with each other in this arc. Instead they become better acquainted with their respective second leads — Cheng Yi and Liu Qing Wu & Bu Qi and Dong Fang Shi.

Dong Fang Shi is a miracle doctor, scholar and an incredible warrior. Pretty perfect. Sheng house approach him to save Bu Qi from poisoning. Dong Fang Shi acquiesces and reveals that he is in fact Bu Qi’s fiancé.

Long story short, Bu Qi’s grandfather was accused of a crime which Dong Fang Shi’s family rescued him from. In return they required either marriage to their daughter or an exorbitant amount of money. Xue Fei was initially suppose to marry Xiao Jiu Feng (Dong Fang Shi’s grandfather) however she died and the debt of Sheng house remained unpaid.

Meanwhile, Liu Qing Wu and Cheng Yi get close in defeating Liu Ming Yue (who is in cahoots with Xia Jiu Feng and is Liu Qing Wu’s adopted mother).

At this stage you definitely get the sense that the writers are struggling to keep the story going. Apart from Dong Fang Shi demonstrating how to be the best second male lead ever, this drama literally has no reason to go on. Anyway, back to the story….

It is revealed that Bu Qi is one of the three ‘items’ needed to unlock and fulfill the prophecy of the Bi Luo Tian (however, her life needs to be sacrificed). As Bu Qi’s identity is now revealed everyone is looking for her (including the Emperor).

Dong Fang Shi upon realizing that Bu Qi’s life must be sacrificed decides that he can do things the old fashion way and openly rebels against the Emperor. In the process he captures Mo Ruo Fei, Chen Yi (who has some come up with a weird plan to protect Bu Qi), Xiao Xia and Yun Lang…. the list continues…

As a further side comment (apologies for the number of them)  — Bu Qi throughout this entire arc literally just complains. She doesn’t actually do anything but complains which starts to get really annoying. Quite frankly, I liked Dong Fang Shi so much more in this arc because he is able to withstand Bu Qi’s complaints. Back to the story …

Ultimately, Dong Fang Shi is unsuccessful in his rebellion and decides that the only way he can protect Bu Qi from his grandfather (who now believes is intent of killing Bu Qi) is by marrying her.

This is where this drama takes a turn for the worse (its probably the reason why its Viki rating plummeted after the finale aired). A massacre of the cast takes place. The death toll includes Mo Ruo Fei (who is killed by Dong Fang Shi), Xiao Xia (who died trying to protect Bu Qi), He Feng, Yun Lang, Lin Dan Sha, her brother and ultimately Dong Fang Shi and Chen Yi (who both died protecting Bu Qi from Dong Fang Shi’s grandfather)… Why? I am still not sure.

So Bu Qi lives but no one else (and they all die such senseless deaths)… Honestly, I thought this was one of the worst endings I have ever watched. How is it the Liu Qing Wu was able to get over Chen Yi (and get with the Emperor in the process), resolve her issue with her twin and get revenge on Liu Ming Yue but no one else was able to get a happy ending?

This was such a rushed, patched ending that I am still reeling. From what I have read this ending is the opposite of what happens in the novel, that is where Chen Yi and Bu Qi end up together & Dong Fang Shi becomes Emperor… The ambiguous ending (with Chen Yi mysteriously reappearing) did not help at all.

For an upbeat drama, it took a very dark turn. And I (like a lot of others) was not impressed. But I can’t ignore the fact that I did enjoy a fair portion of this drama (and its soundtrack) so will maintain my original rating which is a 3.75/5 with the caveat that the ending is a 0/5.

What did you think of I Will Never Let You Go?