Goodbye My Princess (东宫) is based on a popular Chinese novel of the same name. The sound, set and script were all very well done. A quick compare with Princess Agents (2017)  (both are based on time periods like the Warring States period) demonstrates just how far Chinese dramas have come by way production value.

Admittedly I started watching Goodbye My Princess because of the promise of two endings — the original sad ending and an alternative happy ending — unfortunately that rumour turned out to be false and Youku issued a statement that this drama would be true to the novel (although there is an epilogue which I will go into more detail in the Episode Guide below).

While you probably won’t find a couple you can wholeheartedly get behind in Goodbye My Princess (I recommend The Story of Ming Lan for that), the story was beautifully told. Most viewers will already know the ending but for those who don’t, I won’t spoil it here (there will be spoilers below in the episode guide).

The drama is about Xiao Feng (portrayed by Peng Xiao Ran 彭小苒, also known as Fan Bing Bing’s 范冰冰 protégé) — the 9th Princess of the Wei. Well-meaning Xiao Feng is adored by everyone around her and as result is petulant and self adsorbed. As a consequence of her family’s connection, princes from various kingdoms want to marry her. However, an arranged marriage for the free-spirited Xiao Feng is out of the question.

Amongst those princes is the ambitious 5th Prince of  the Li Empire, Li Cheng Yin (portrayed by Chen Xing Xu 陈星旭) . In an effort to bring peace to his kingdom and seek revenge against the Danchi people he disguises himself as Gu Xiao Wu — a tea merchants son — to befriend Xiao Feng and infiltrate the Wei/Danchi stronghold.

Second male lead Gu Jian (portrayed by Shawn Wei 魏千翔) is Cheng Yin’s older cousin and Xiao Feng’s teacher. He is complicit in Cheng Yin’s betrayal of Xiao Feng but at the same time is also deeply in love with her — he is the resident conflicted/tormented character.

I have to say that I didn’t think I would enjoy this drama (I usually stay away from tragedies) but as the story progressed I found myself totally absorbed in the story.

This drama in lot of ways was a combination of Ten Miles of Peach Blossoms and The King’s Woman (memory loss, self-sacrifice, multiple lives…). I’ve already mentioned that the cinematography and soundtrack were exquisite but the acting… female lead Peng Xiao Ran could have done better. Although her playful nature came out, her other expressions felt a bit strained — she also eerily resembles Angelababy, don’t you think?

As a couple though, Xiao Feng and Li Cheng Yin worked really well together. Watching Peng Xiao Ran (who was 27 years old at the time of filming) playing 18 year-old Xiao Feng alongside Chen Xing Xu (who was 21 years old) playing the older Li Cheng Yin wasn’t awkward in the way it was (with the large age gap) in I Will Never Let You Go.

While I thought that Goodbye My Princess could have done with fewer political scenes, overall the plot was tight and there weren’t too many filler scenes/episodes. I have put a 🌟 next to my favourite arcs in the Episode Guide below. Please beware there are ‼️spoilers‼️

The first arc sets up the backstory of our characters and will explain a lot of their actions in future episodes. For example, we see how loved Xiao Feng is in the Western Province and how fiercely protected/sheltered she is by her mother, grandfather and teacher. This goes a long way in explaining why she is so carefree but also how she is unable to handle the political intrigue.

Li Cheng Yin on the other hand, is the 5th Prince and has to battle not only for the throne but for his survival. In the first arc he witness’s the murder of his older brother (the Crown Prince) which supposedly was caused by the Danchi people (Xiao Feng’s grandfather’s tribe) and finds out that his birth mother was murdered by his legitimate mother (the Empress).

Although Li Cheng Yin at the beginning plans to use Xiao Feng to further his power and seek revenge, her earnestness and warmth cause him to fall in love with her. This is much to the distress of Gu Jian who initially sets Li Cheng Yin up with Xiao Feng to avenge his family (who have been wiped out) but later deeply regrets it.

Despite Li Cheng Yin genuinely falling in love with Xiao Feng he executes his plan and betrays Xiao Feng by killing her grandfather, forcing her mother to commit suicide and driving her father mad (pretty heavy stuff).

To further strengthen his power he also plans to force-ably marry Xiao Feng — who is still very powerful as she is still connected and has influence on both Western Province and the Danchi.

Grief-stricken Xiao Feng — who genuinely fell in love with Li Chen Ying — looks for the River of Forgetfulness to forget the pain caused by the man she thought she knew (and loved).

With the assistance of A’du (her loyal friend and maidservant) she finds the River of Forgetfulness and jumps in. Li Cheng Ying follows her into the river and as a consequence also loses his painful memories, namely his love and betrayal of Xiao Feng.

Xiao Feng, accompanied by loyal maidservant A’du (who pretends to be mute to stay by her side) becomes accustomed to life in the Central Plains while she waits to be married to the Crown Prince —  at this stage, the Crown Prince is Li Cheng Yin’s older, calculating brother.

Ultimately, Li Cheng Yin outmaneuvers his older brother, exposes his corruption and his role in the murder of the previous Crown Prince. This has him sentenced to death by the Emperor. After disposing the former Crown Prince, Li Cheng Yin is now heir to the throne and is Xiao Feng fiancé.

Things get complicated for our couple when:

Ultimately, Li Cheng Yin marries Xiao Feng (for the second time) in the Central Plains on the same day he takes Zhao Se Se as his concubine (this was a bit strange).

I can’t say I was too interested in the above sub-plots so I won’t go into any more detail. Instead I will concentrated on the main love triangle (there are multiple) below…

Xiao Feng and Li Cheng Yin grow a lot closer in this arc. Li Cheng Yin (somehow, it’s not really explained) grows increasingly more attached to Xiao Feng but in order to protect her from the Empress/Zhao Se Se treats her quite badly (verbally and physically).

Despite the abuse, Xiao Feng also begins to fall in love with Li Cheng Yin. Meanwhile Gu Jian becomes increasingly concerned of Xiao Feng’s growing affection for Li Cheng Yin and abducts her in an effort to try and trigger her memory.

Gu Jian’s efforts partially pay-off and Xiao Feng remembers Gu Xiao Wu (Li Cheng Yin’s alias in the Western Province) but believes Gu Jian is Gu Xiao Wu. Despite her mixed up memories, she still has a soft spot for Li Cheng Yin which cause her to the city to wish him farewell.

While within the city gates, Li Cheng Yin spots her and starts a fire to stop her leaving. In the end Xiao Feng is hit on the head by burning timber which properly triggers her memory…

After her head injury, Xiao Feng remembers Li Cheng Yin’s betrayal/the fate of her family and is devastated. Li Cheng Yin who still doesn’t remember, cannot understand why Xiao Feng hates him so much and becomes increasingly unstable and controlling.

What follows is a number of tragic deaths — the first is the death of Gu Jian who is killed on Li Cheng Yin’s order, followed soon by A’du who dies breaking Xiao Feng’s fall from the city wall.

Xiao Feng’s brother takes her body away (so its unclear whether she died, although I am pretty sure she did). The next scene is of an elderly Li Cheng Yin talking to the loyal General Pei about Xiao Feng and how he intends to meet her in the Western Province.

It is worthwhile to note that Li Cheng Yin becomes Emperor soon after Xiao Feng leaves following his father suffering a stroke after Ming Yue kills herself. 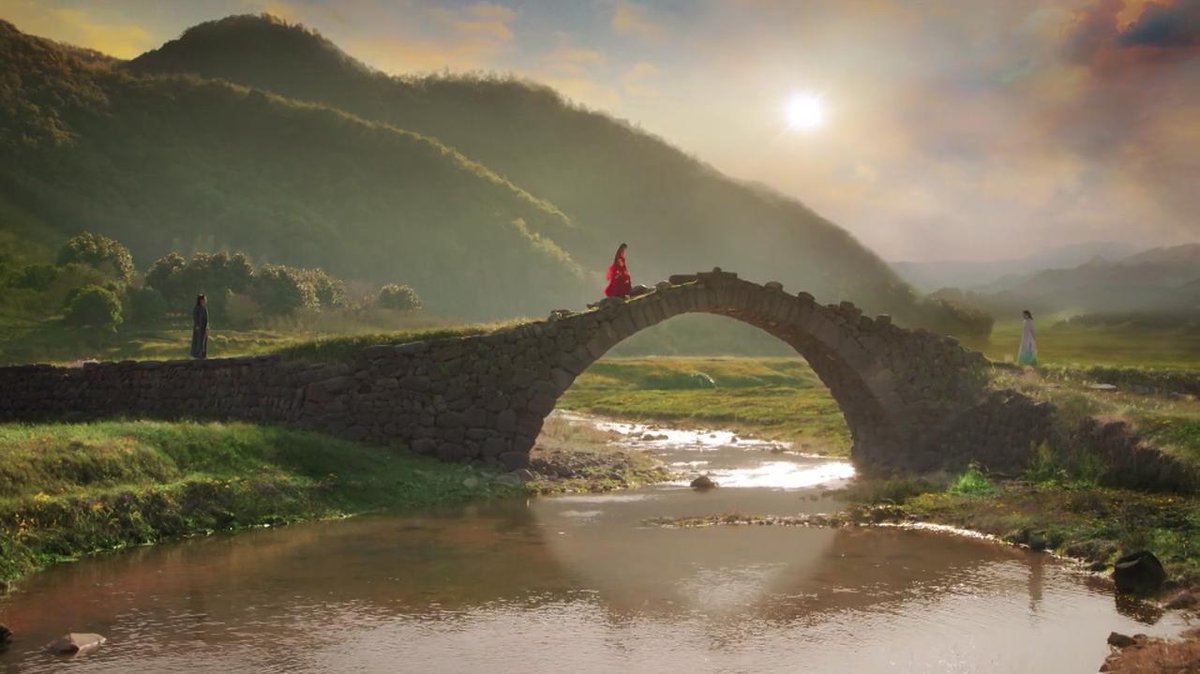 The ending was quite unsatisfactory for a lot of people which has resulted in YouKu producing an epilogue. The Epilogue is comprised of four short clips on YouTube and Youku. It does not resurrect anyone from the dead but reunites reincarnations of Xiao Feng and Li Cheng Yin (now a married couple in the 21st century).

In the first clip, Xiao Feng wakes up from a nightmare where Li Cheng Yin lets fall into an abyss. Li Cheng Yin assures her that in this life he will never leave her. He then promises her that when the tea season is done (he is really a tea merchant in this life!) they will go to the grassland and he will catch 100 fireflies for her. This clip was by far my favourite of the four, they could have stopped at this clip and I would been fine.

Although this is not the alternative ending that was initially hinted at, I was actually more satisfied with this type of ending. As pointed out to me, a story should only build up to one ending (making it a coherent story). Having the tragic ending we have that coherent story. Having them reincarnated makes me happy…

What did you think of Goodbye My Princess?